5 Best IDEs For Web Developers On Windows (With FAQs)

Determining the best IDE to use as a web developer can be a difficult process. You want to ensure you’re picking the best tool to learn and use for perhaps years to come. What’s more, as a Windows user, the choice can be even more difficult. It seems like all great IDEs are made for Macs.

Based on my experience using IDEs as a web developer over the last number of years, I’ve written this article to share with you my thoughts on the best IDEs for web developers on Windows.

In this article, we’ll take a look at what an IDE is in comparison to a text editor, the advantages of using an IDE, the 5 best examples of IDEs, as well as some FAQs on the topic of IDEs. 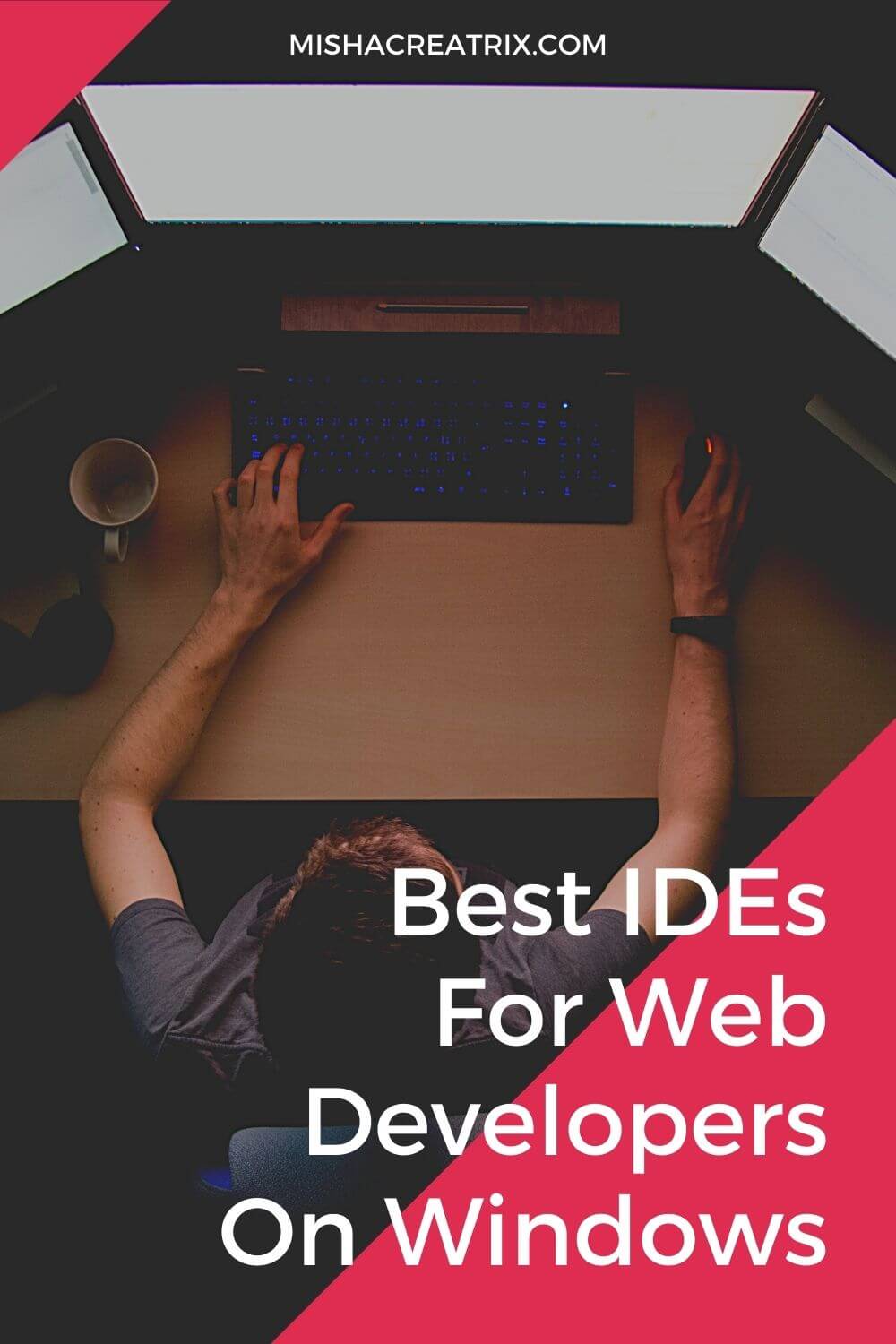 What Is An IDE?

If you’re new to the world of web development you might be unsure what the term IDE means.

The term IDE stands for Integrated Development Environment. An IDE is essentially a piece of software that aids in the process of website and software development. The software contains helpful tools and plugins like code autocompletion and build automation tools that make the process of creating code more efficient.

Some well-known examples of IDEs include: NetBeans, IntelliJ IDEA, and Visual Studio Code.

Once you’ve mastered the basics of web development i.e. HTML, CSS, and JavaScript basics, it’s a good idea to start using an IDE to speed up your workflow.

What’s The Difference Between An IDE And A Text Editor?

The term IDE and text editor can sometimes be seen used interchangeably in the web developer world.

With that being said, an IDE is not the same as a text editor, they are 2 different types of tools.

Let’s talk about how these 2 tools are different and why they are so often confused.

As we’ve mentioned already, an IDE is a piece of software that makes web development easier through its plugins and tools.

This makes an IDE the only environment you need for web development as you can write code, compile it, and test it, all from the IDE.

A text editor, on the other hand, is simply used for writing code in plaintext (i.e. without any type of formatting like bold or italics). Text editors, like Notepad ++, feature an interface for typing out code, without any additional plugins or tools like that of an IDE.

This means that using a text editor for web development will also require the use of other tools to build code and to test it.

With all of that being said let’s summarize the difference between an IDE and a text editor.

An IDE is a piece of software that features plugins and tools making it the only piece of software you need for web development. A text editor doesn’t feature any of these plugins or tools that an IDE has, meaning you’ll also require separate software for compiling and testing your code.

What Are The Advantages Of Using An IDE For A Web Developer?

Now that we’ve looked at the basics of an IDE it’s easy to understand the many benefits of using an IDE as a web developer.

Let’s look at my top 5 advantages of using an IDE below.

One Tool For Web Development

A huge benefit of an IDE is the fact that it is the only tool you’ll need for web development. An IDE will have all of the tools and plugins you need to develop built-in.

This will make the process of web development quicker and easier, not to mention cheaper as you won’t have to buy other tools.

Making use of an IDE as a web developer can vastly improve your workflow and help you develop quicker.

By having all of the plugins you need in one place as well as helpful tools such as code completion and version control, you’ll be able to develop more efficiently.

Code completion is what happens when you start typing into an IDE and auto-complete suggestions pop-up for you to select from.

This can speed up your development process dramatically and prevent the majority of code mistakes caused by misspelling.

Debugging tools are an important feature of IDEs. These allow you to identify and resolve errors in your code with ease.

This means you won’t have to scour your code for a misplaced comma or semi-colon which can quickly lead to much frustration believe me.

A version control system is an absolute must for any level of web developer especially those working with teams.

It’s important to be able to save each version of your web development project so that you can roll back if something is broken.

Version control is something that is included with all good IDEs and lets you utilize this functionality right out of the box.

There is a lot to learn about version control systems that would be useful to all web developers. With that in mind, I recommend you check out the Learning Lab from Github.

Now that we’ve looked at the basics behind an IDE, let’s start talking about the best IDEs for web developers on Windows.

I’ve been able to use each of the IDEs on this list over the last number of years and found each to have various pros and cons.

Visual Studio Code is the cream of the crop when it comes to IDEs.

It is a free open-source IDE that is available on all platforms including windows.

The interface is intuitive, clean, and easy to use and has a wealth of plugins and addons to choose from to streamline your development workflow.

NetBeans is an IDE that has been around for a number of years at this point. This makes it a comprehensive IDE full of features for web developers to make use of.

I first started using NetBeans for WordPress web development as it was recommended by many online instructors that I came across.

NetBeans is a free to use IDE that can be installed across all platforms including Windows.

It’s not as visually appealing as Visual Studio Code, but what it lacks in appearance it more than makes up for in its capability.

IntelliJ IDEA is a big name in the world of IDEs and with good reason.

This is not a free IDE but is a popular choice for organizations and web development teams.

It’s also available on all platforms including Windows.

Brackets is a code editor designed specifically for web designers and developers. Though not technically described as an IDE, its use of extensions allows you to build a comprehensive web development environment.

Brackets is a free open-source code editor that can be used on all platforms including Windows.

Some of its most popular extensions include Git integration, W3C validation, as well as Beautify which formats HTML, CSS, and JS for you.

I can’t put together a list of IDEs for web developers without mentioning Sublime Text. That’s why it’s on this list as a special mention.

Many people class Sublime Text as less of an IDE and more of a text editor. This is a fair statement to make, however, not as clear cut as you might imagine.

Described on its website as a sophisticated text editor, its use of packages to add additional functionality to this tool makes it as close to an IDE as you can get without actually being a fully-fledged IDE.

Sublime Text is definitely worth considering as a beginner web developer. You don’t have as steep a learning curve as a traditional IDE plus you can add on tools as you advance your skills.

We all want the best tools for web development without breaking the bank.

Fortunately, the wide range of free open-source IDEs available today is exceptional. There is a lot to choose from.

The best free IDE that I have used is Visual Studio Code. It is a comprehensive IDE with all of the tools you need for any web development project you have. The help documentation on their website is easy to read and great for getting you started. There are also plenty of free videos to help you to learn how to work with this IDE.

As a result, in order to do full stack web development, you need an IDE that will be able to manage all aspects of each part of the stack from front end to databases to servers.

With all of that in mind, the best IDE for full stack web development has got to be Visual Studio Code. It is a very comprehensive IDE that offers a range of useful tools and plugins to make the full stack development process a breeze. What’s more, this is a free open-source IDE to download and use.

What’s The Best IDE For Beginners?

If you are a beginner web developer, the best thing I would recommend is to continue to learn everything you can about HTML, CSS, and JavaScript.

With that in mind, you don’t really want an IDE that will hold your hand too much as this will prevent you from learning the ins and outs of the code.

So, with that being said, the best IDE for beginners has got to be Sublime Text. It offers a simple, clean interface for basic coding, plus the option to add on tools as you progress as a web developer. Not to mention the fact that you can download and try it out for free.

You’ve made it to the end of the article! I hope you found this information useful. Let’s summarize what was covered before we finish:

We were able to cover a lot in this article so I hope you found some value reading it.