Should UI Designers Be Able To Draw? (With Drawing Tips)

A very common question most people have before they become involved in UI design is should UI designers be able to draw? Lots of people say they are not the best at drawing and so this can prevent them from becoming a UI designer. 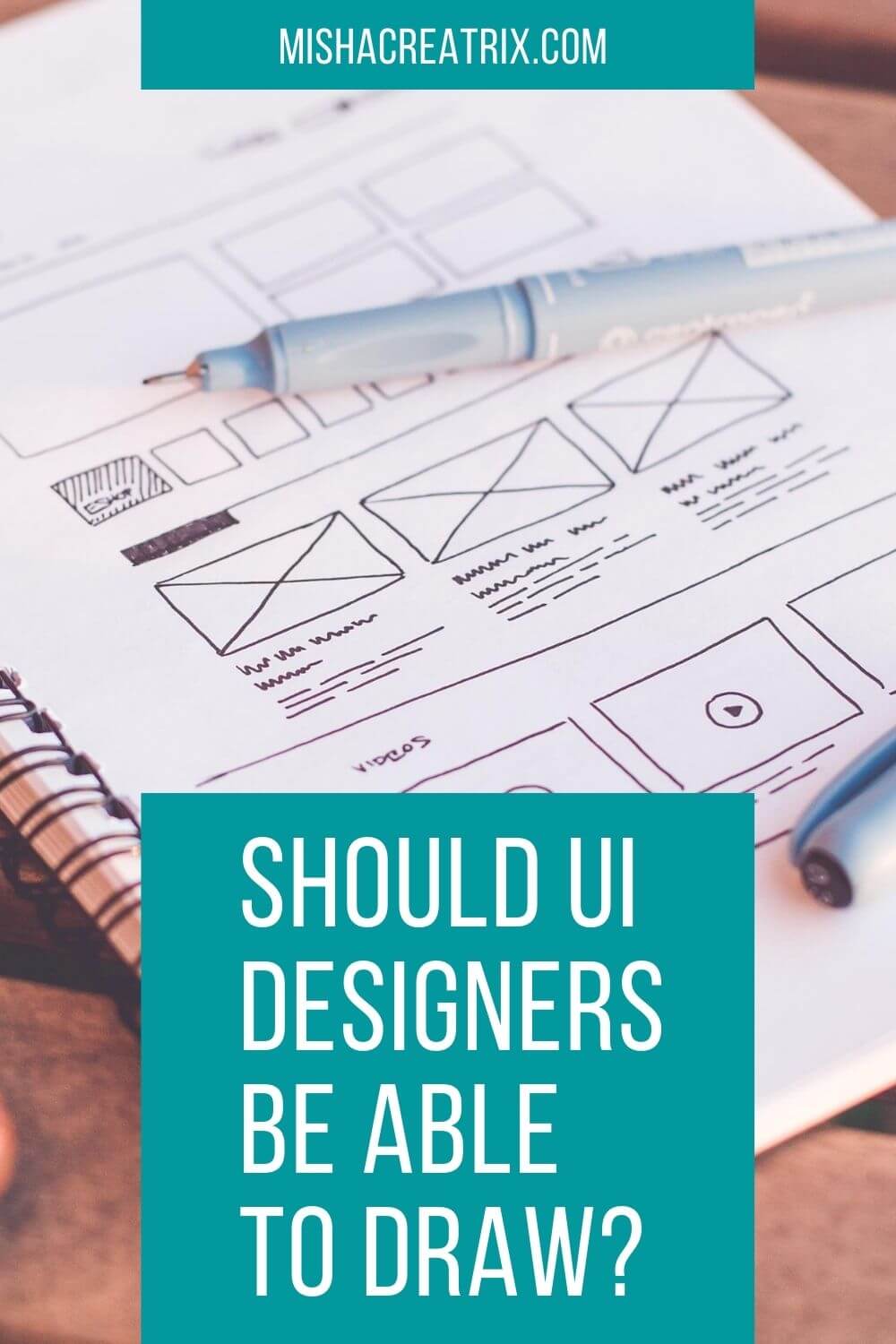 What Is A UI Designer?

Let’s discuss what a UI designer is to give you a little more context.

To break that down even further, a user interface is the point where a user interacts with a digital device. For example, a website or an app on your phone.

UI design itself is concerned with the aesthetics of a user interface or how it looks and feels.

Aspects such as the typography, the colors used, buttons, and iconography are all important to a UI designer.

The goal of a UI designer is to create designs for a digital product like an app or a website that guides the user through the product without having to think too much.

A common misconception that occurs today is between a UI designer and a UX designer. To learn more about the differences between each of these professions, take a look at this detailed article from careerfoundry.com: The Difference Between UX And UI Design - A Layman’s Guide.

What Is The Difference Between UI Design & Graphic Design?

By now you might be wondering if UI design is similar to graphic design. Based on the description above it’s possible these professions could be confused, which happens quite often.

We mentioned above that a UI designer is responsible for creating designs for products like apps or websites.

Similarly, a graphic designer is responsible for creating visuals that engage people.

What Skills Do I Need To Be A UI Designer?

So by now, you know that you don’t need to be an expert at drawing to be a UI designer.

With that being said, let’s talk about the skills you need to be a successful UI designer.

Let’s break down these skills by talking about soft skills and hard skills separately.

Soft skills refer to the less tangible, personal, and social types of skills. These are becoming increasingly important and valued by people responsible for hiring.

Hard skills are the more traditional and technical skills that you need to carry out your job as a UI designer.

5 Most Important Soft Skills For A UI Designer

Being a good communicator is a soft skill that I would argue is essential for almost any type of job out there.

In particular as a UI designer, you’ll need to communicate your ideas effectively to your team to be able to create a professional finished product.

Not only that but you’ll also need to be able to talk to the customer frequently to ensure what you’re designing is in line with their goals and expected outcomes.

Being able to empathize with the target audience will allow you to understand how they think and operate.

This in turn will give you an insight into how to create a design that will be easy for the end-user to interact with.

In addition to being able to communicate well with your team and with clients, you’ll also need to be effective at presenting your ideas.

You’ll be required to give regular updates to team members and clients showcasing your designs. Being able to get your ideas across well will lead to a much smoother experience of creating the end product.

Everybody will be on the same page and things can run smoothly.

A very important soft skill to talk about is how to give and receive constructive feedback.

Throughout the process of creating a finished product, you’ll be communicating with team members and clients frequently as we mentioned.

Being able to give constructive feedback to clients and team members is essential for a high functioning team and continued progress on a project. It can be easy for feelings to be hurt if the criticism is too harsh so any feedback should be carefully considered beforehand.

As well as giving feedback, it’s arguably more important to be able to receive feedback well.

This is something I’ve struggled with in the past as my designs have been tossed aside in favor of a different approach.

Being able to receive feedback and incorporate it into your designs will overall lead you to become a better UI designer and is something worth noting.

It’s easy to become so attached to your ideas and designs. However, when they are not liked by others, it can become truly frustrating.

As a UI designer, it’s important to adopt the mindset that you are not your ideas.

Consider every piece of advice and feedback that’s given to you and understand that this is how designs improve and become more effective.

5 Most Important Hard Skills For A UI Designer

Being able to conduct user research and to create personas based on your findings is an essential skill for a UI designer.

As the goal of a UI designer is to create a design that is easy to use, it’s crucial to be able to understand the target audience of a product.

There is so much to learn as regards user research and personas as these can be pretty in-depth topics however anyone can get started with the basics.

To learn more about these topics, I highly recommend you visit, and bookmark, the nngroup.com website.

It was created by the 2 most prolific people in the industry: Jakob Nielsen and Don Norman and you will definitely come to learn more about them as you look more into UI and UX design.

At the core of being a UI designer is your knowledge of interaction design and its principles.

Learning how to create a usable design is the end goal of every UI designer and this can’t be done without a firm standing in how interaction design works.

To learn more about this topic, I recently read a great article on toptal.com that you can check out here: Boost Your UX with These Successful Interaction Design Principles.

Another set of fundamental skills for a UI designer is color theory and typography.

By living and breathing color theory, you’ll be able to create visually appealing designs using color. You’ll know how to design a button that will make it stand out and encourage the user to press it.

Mastering the art of typography will allow you to leverage different fonts that are easy to read and pleasing to look at to create a professional-looking design.

People make use of many different shapes and sizes of devices to access web pages or carry out tasks online like checking their bank account or paying bills.

With this in mind, it is up to the UI designer to understand responsive design practices that will allow them to create designs that can function well on all sizes of screens.

5 Ability To Work With A Design Tool

A great way to give yourself a leg up as a new UI designer is to start learning a design tool.

There are so many out there today including: Photoshop, Illustrator, InDesign, Sketch, Figma, Adobe XD, and more.

Pick at least one design tool that you can master and you’ll be able to create your designs efficiently.

Benefits Of Learning To Draw As A UI Designer

OK, so you’ve probably read the introduction to this article where I said you don’t need to be able to draw well to be a UI designer.

With that being said, I definitely think there’s some value to learning how to draw, even just basic shapes.

By simply practicing the art of drawing regularly, you’ll see your skills improve over time.

As you become better able to draw and sketch, you’ll notice that you can more clearly get your ideas out of your head and onto paper.

The act of simply drawing your ideas out will make the process of creating designs much faster and you’ll be able to iterate through multiple designs in a shorter time.

How To Start Learning To Draw As A UI Designer

OK, so hopefully I’ve managed to sell you on the idea of learning to draw. If I have, I’m sure your next question is where to start.

Over my time designing, I’ve come across some great ways to improve your drawing abilities that I’ll share with you below.

The best way to get started with drawing is to simply draw and doodle!

The next time you’re working on a project, take out a notebook and a pen or pencil and start sketching and doodling out potential ideas.

The first few times you try this out you don’t even have to show these to anybody.

However, over time, you’ll see that you’ll become better at it and you’ll be happy to show team members your sketches.

I recently discovered the idea of Sketchnotes and fell totally in love with it. The process of Sketchnoting involves combining sketches and doodles with notes and ideas.

By utilizing visuals and text, your brain will be more effective at retaining the information. This has the added benefit of giving you a chance to practice your drawing skills.

If this intrigues you even slightly, I highly recommend you check out the SketchNote Army website to learn more.

As with almost any skill or discipline out there today, there is an online course to learn it.

Great platforms such as Skillshare, Udemy, and Coursera are excellent resources for courses on how to draw.

Last, but not least, is YouTube videos. There are videos that can show you how to do pretty much anything on YouTube and drawing is no exception.

I found a great video which you can check out below on how to start sketching that is certainly worth watching:

If you’ve made it to the end of this article, thank you for reading!

Let’s summarized what we covered before we finish:

If you found some value in this article, please consider sharing it on social media to help others to find it.